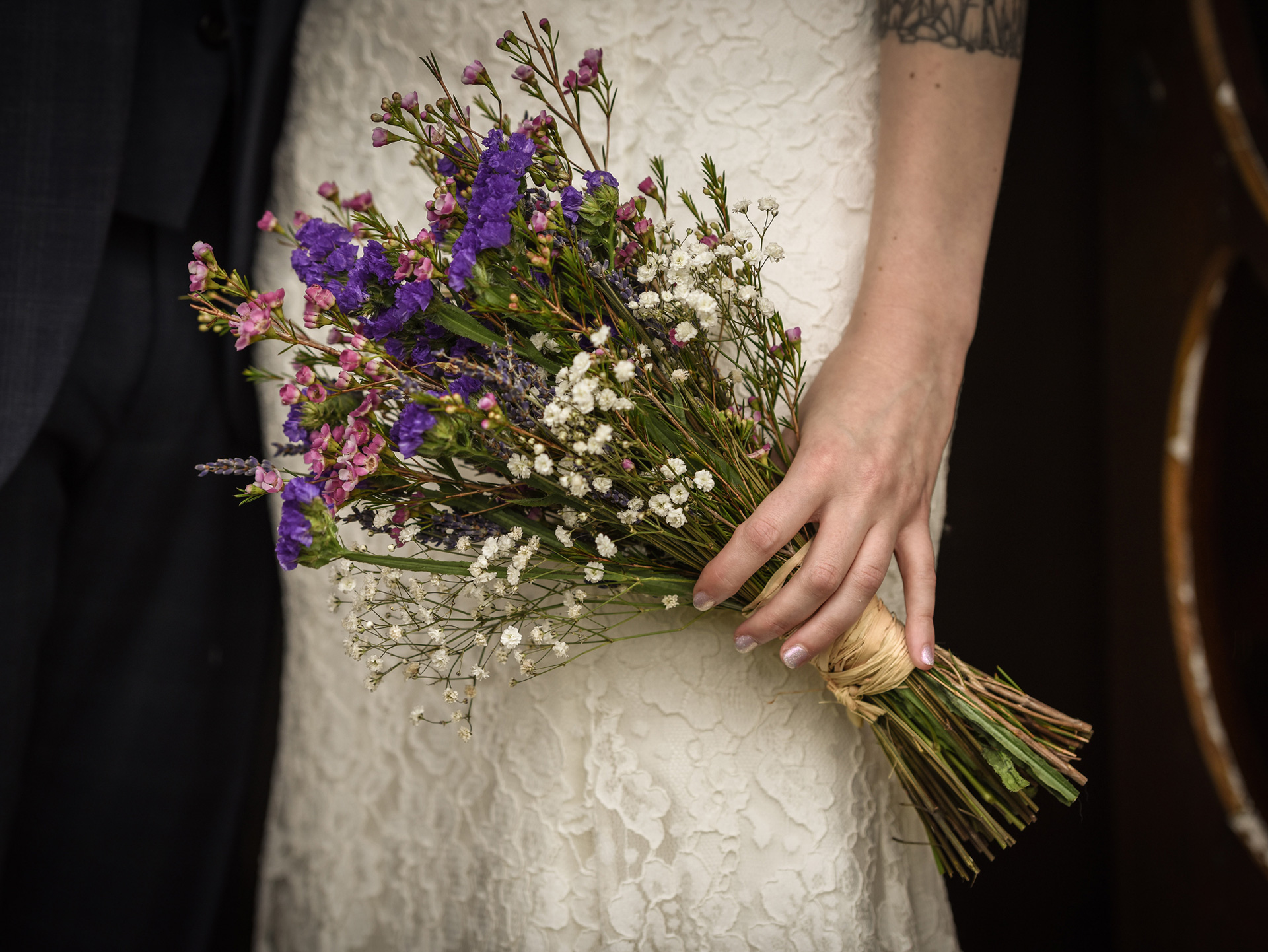 Roulotte Retreat offers a unique boutique wedding venue - the only place in UK with a collection of French hand crafted Roulottes around a lochan. Guests can enjoy the ambience and passion of France in the heart of the Scottish Borders countryside. In three words - Eco Chic Romantique! Weddings at Roulotte Retreat are bespoke and completely unique for each couple. We love helping couples create their dreams into reality with sprinklings of imagination, romance and magic!

For small wedding gatherings we offer bespoke accommodation in the wildflower meadow where guests and nature can live in harmony. Indulge in the glamorous comforts of our roulottes with salon, silk and velvet boudoirs, en suite, kitchen facilities and al fresco dining on the deck. There are seven Roulottes and Horseshoe Cottage with Ruby Bowtop, accommodating up to 22 guests on site for the more intimate wedding, with an option to invite just a few more to maximum 35. Our 1950's Studio offers a large, elegant space to get together with friends and family who are staying on site for celebrations and receptions. Inside, light filled and warm where guests can gather around the huge wood burning stove at its heart. Outside amidst woodland, a Scots Pine Tree grows up through the wooden covered deck festooned with solar fairy lights and lanterns – ideal for a special Wedding Ceremony with a difference!  See 'Retreats & Studio' for more info on The Studio.

For more information please get in touch. 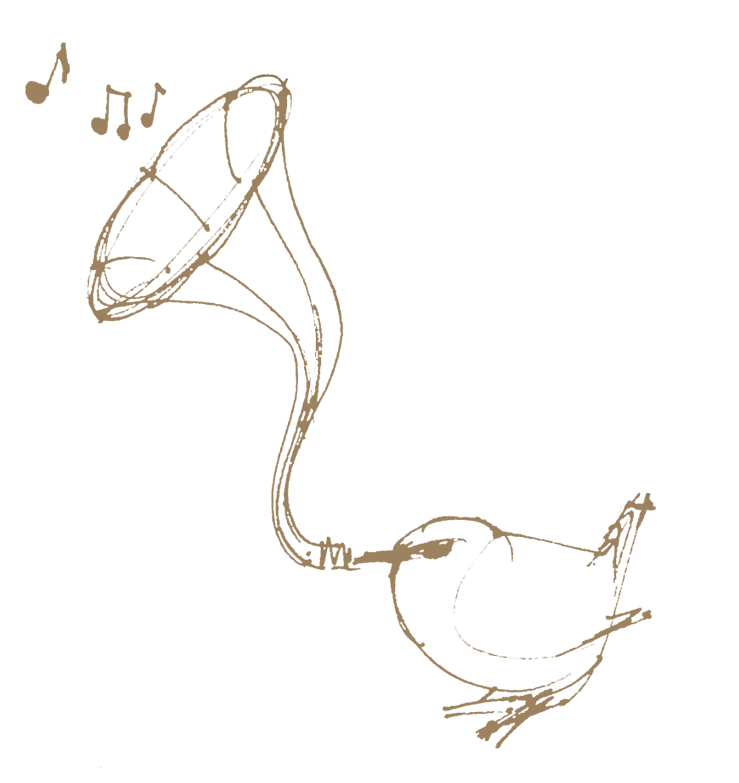 Corinna & Malik on their wedding day 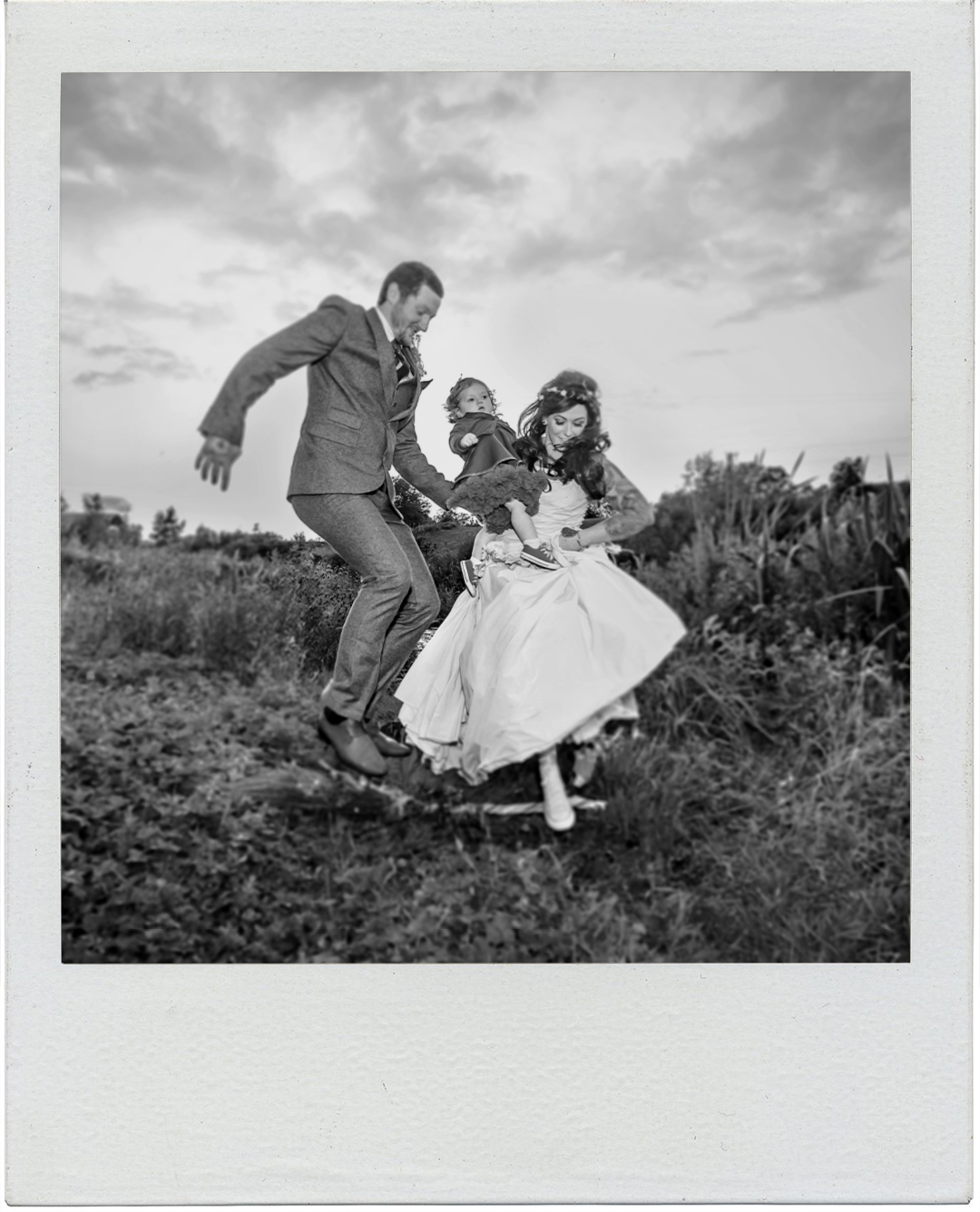 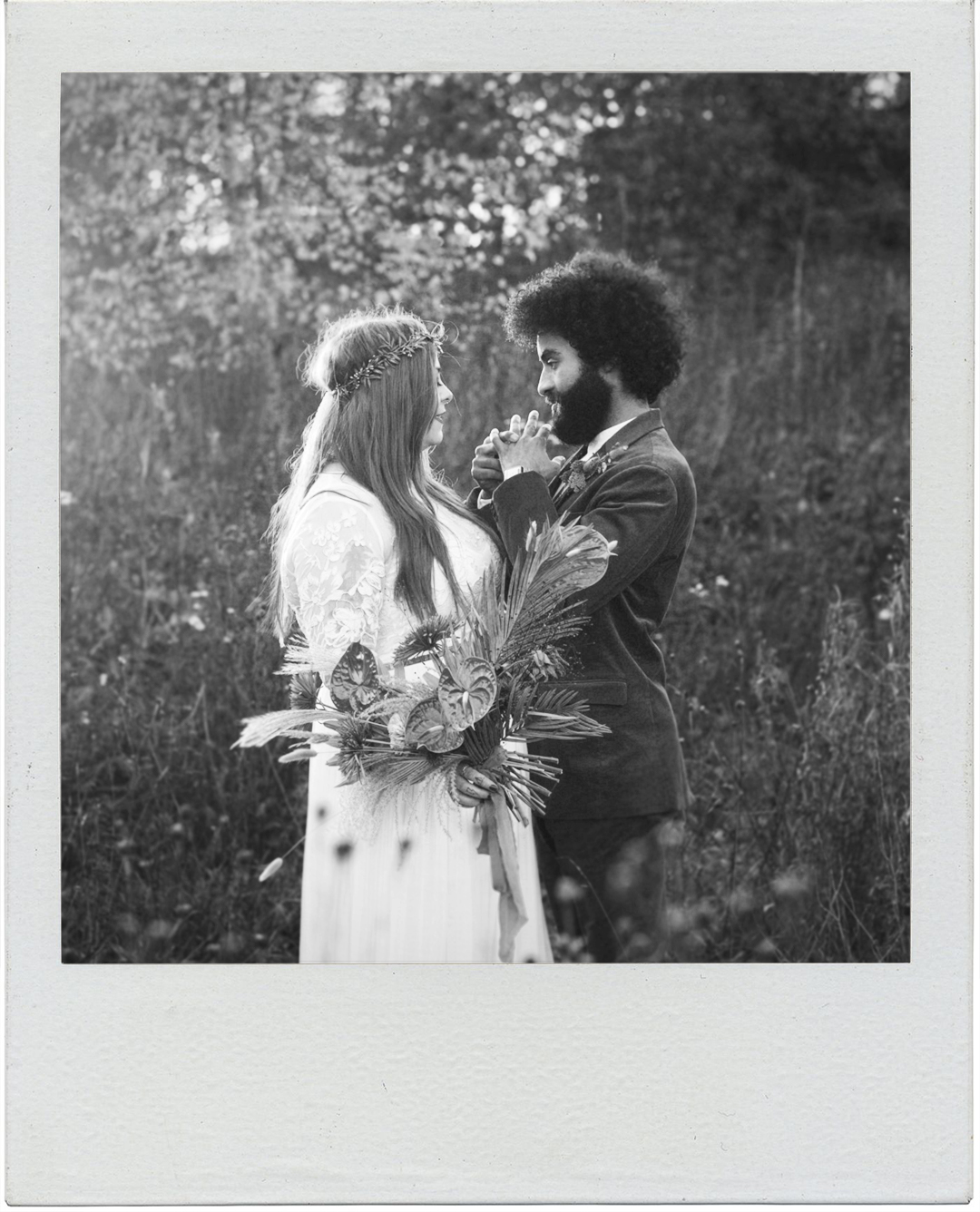 “We originally planned to have a wedding in Sheffield, but with a pandemic on its way we put our plans on hold.” 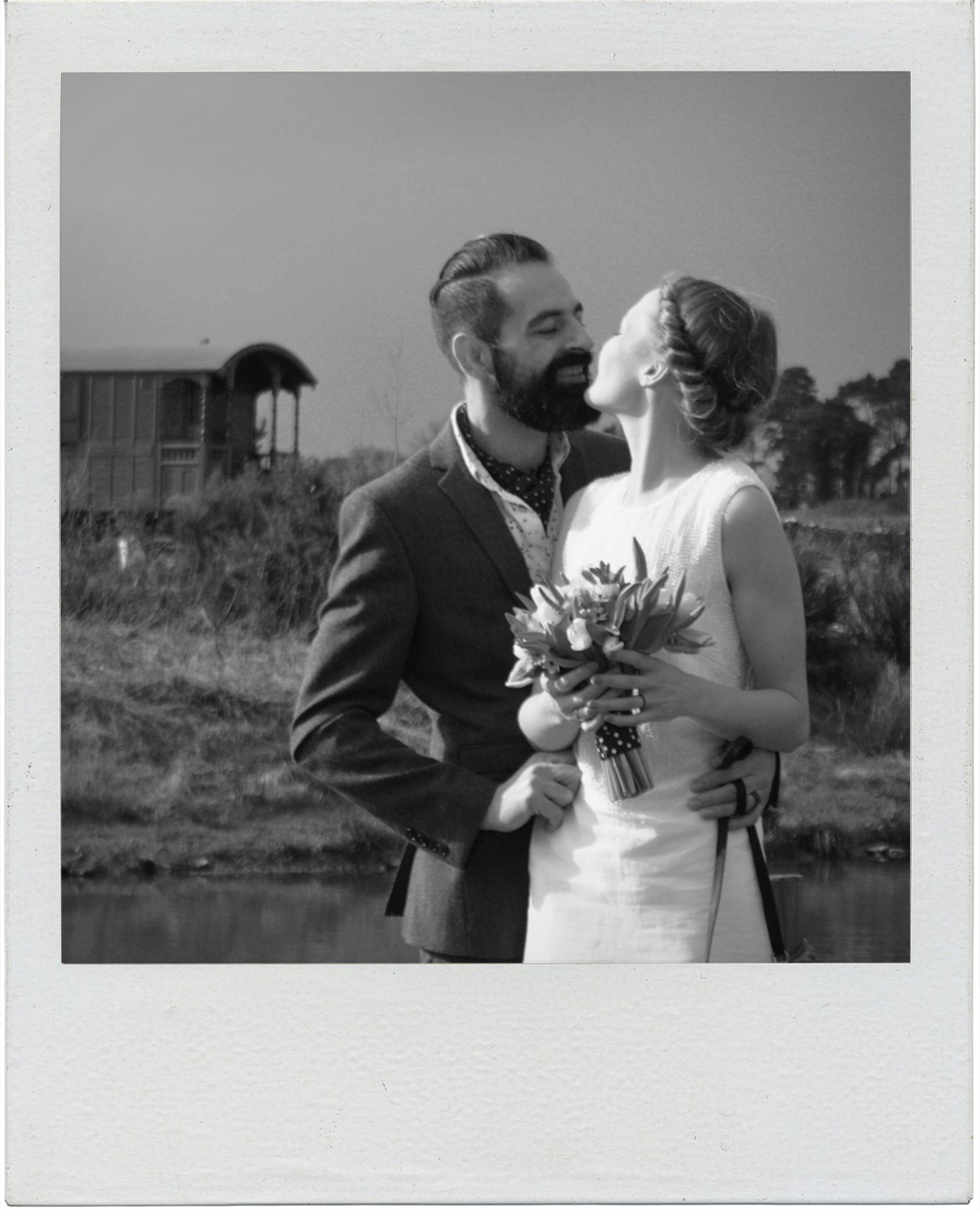 "Roulotte Retreat is the perfect place to elope, it touches the history of the Scottish Borders, it's SO romantic and Avril and Alan make it even more special with their enthusiasm and kindness." 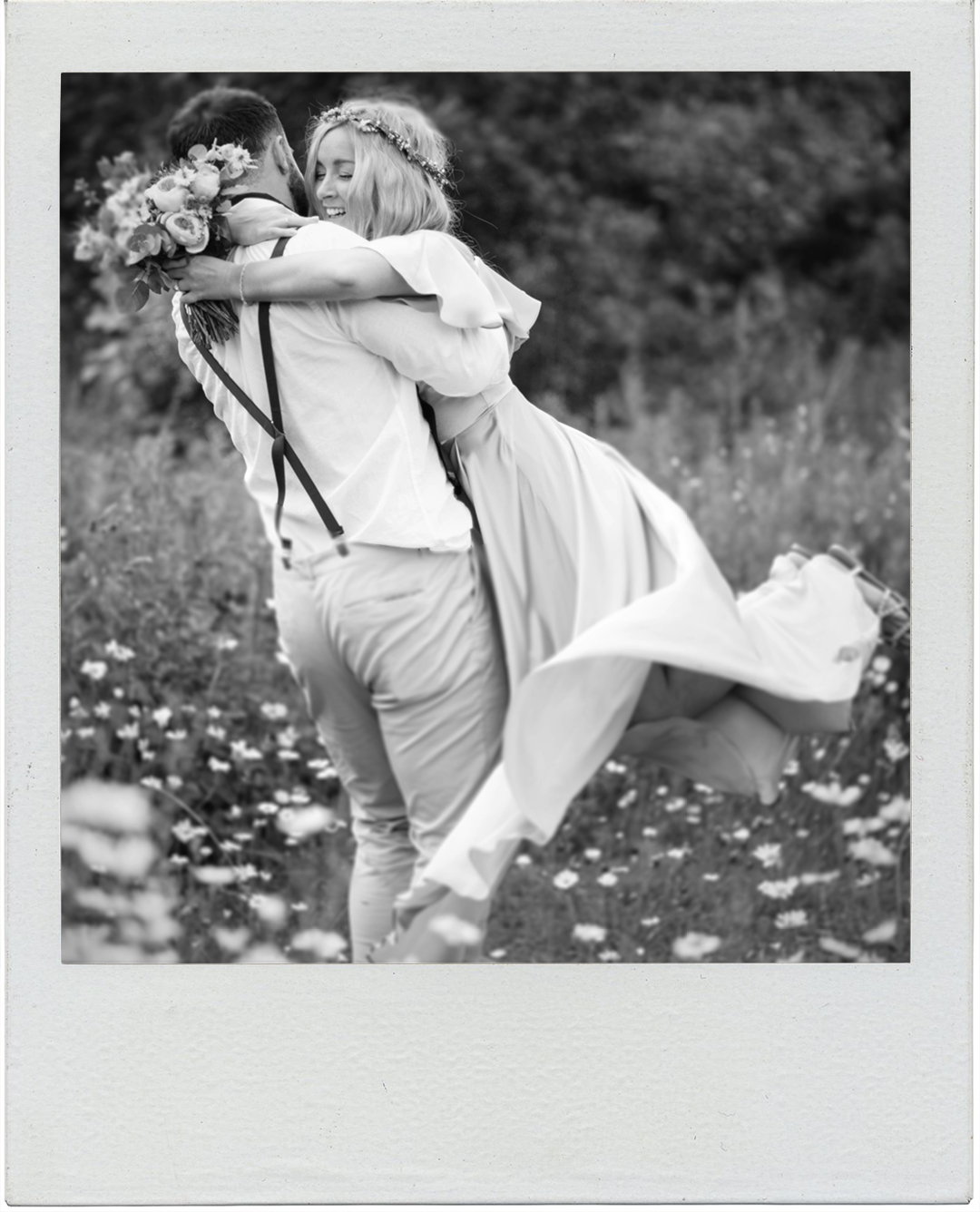 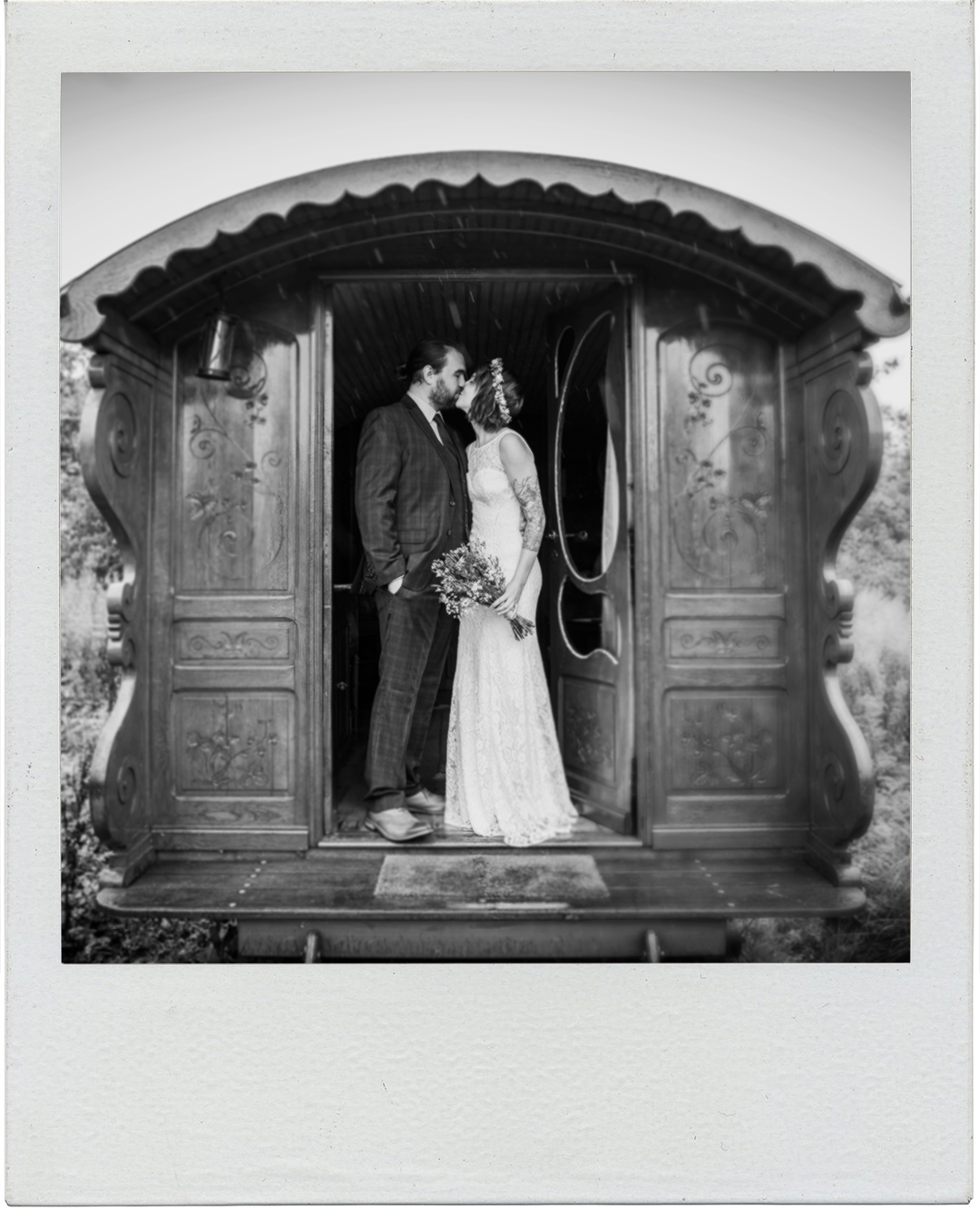 "Roulotte Retreat is like nowhere we have been before. For us, it was a wonderful way to unplug and reconnect with nature and ourselves, which made for a wonderfully tranquil wedding day." 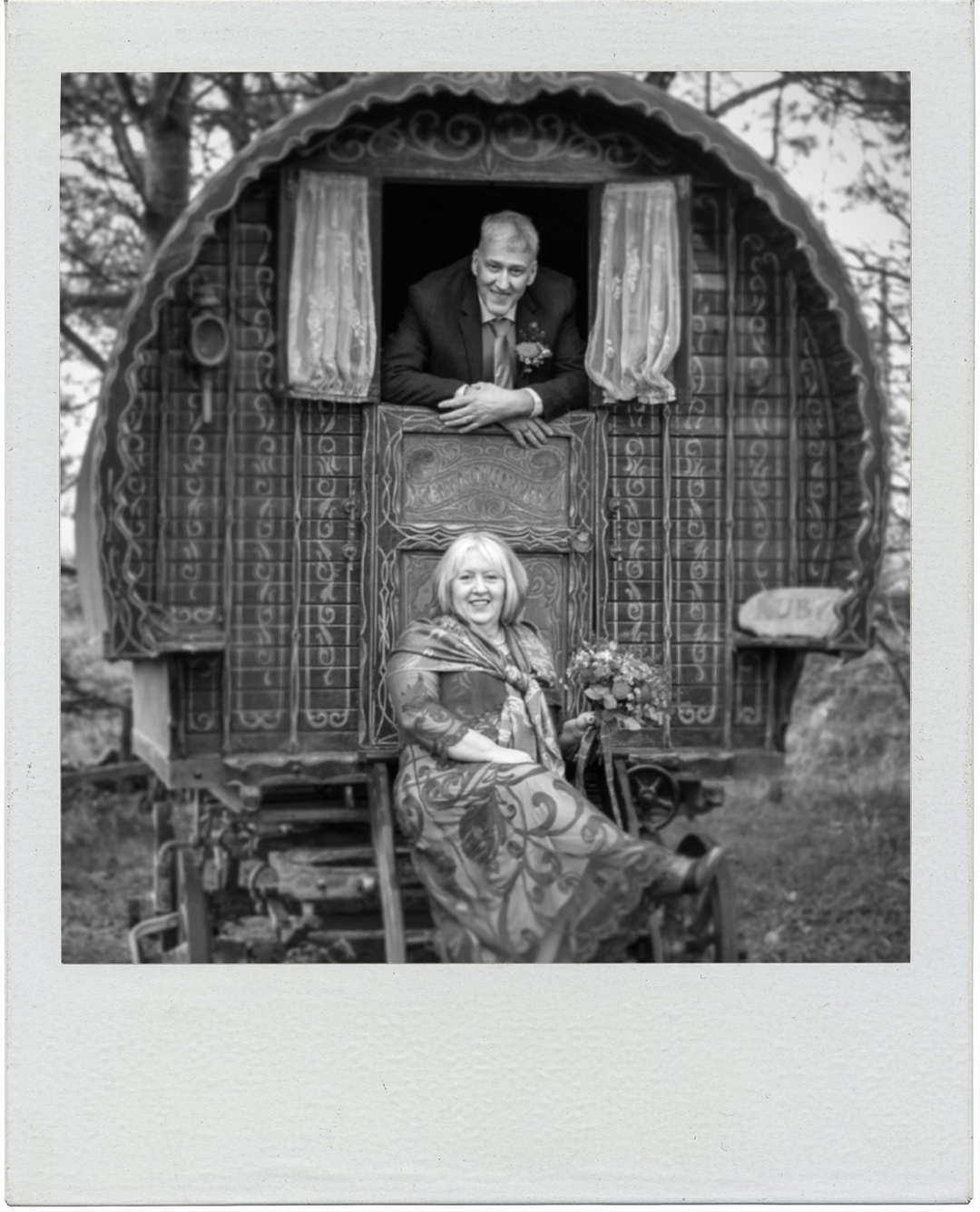 "If you want a completely stress-free wedding day we can highly recommend Roulotte Retreat! From the first phone call to cutting the cake we couldn't have been in better hands." 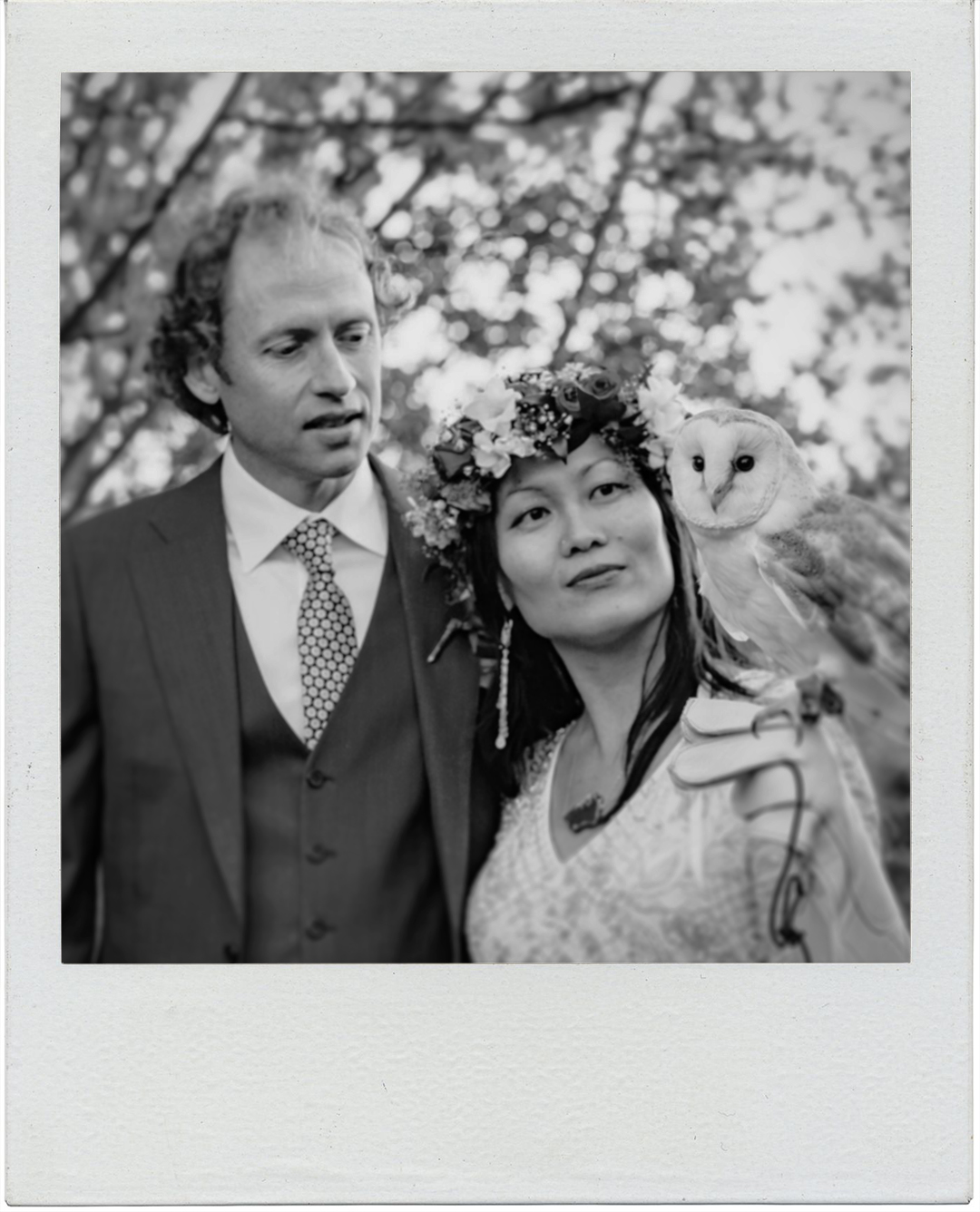 "We were classmates in graduate school in USA and over time our friendship became romantic. Our friends call our relationship “glacial love” because it took us 13 years to tie the knot. We’ve always taken the time that we needed for our relationship. For our Special Day we wished an Elopement in Magical Bohemian Fairyland." 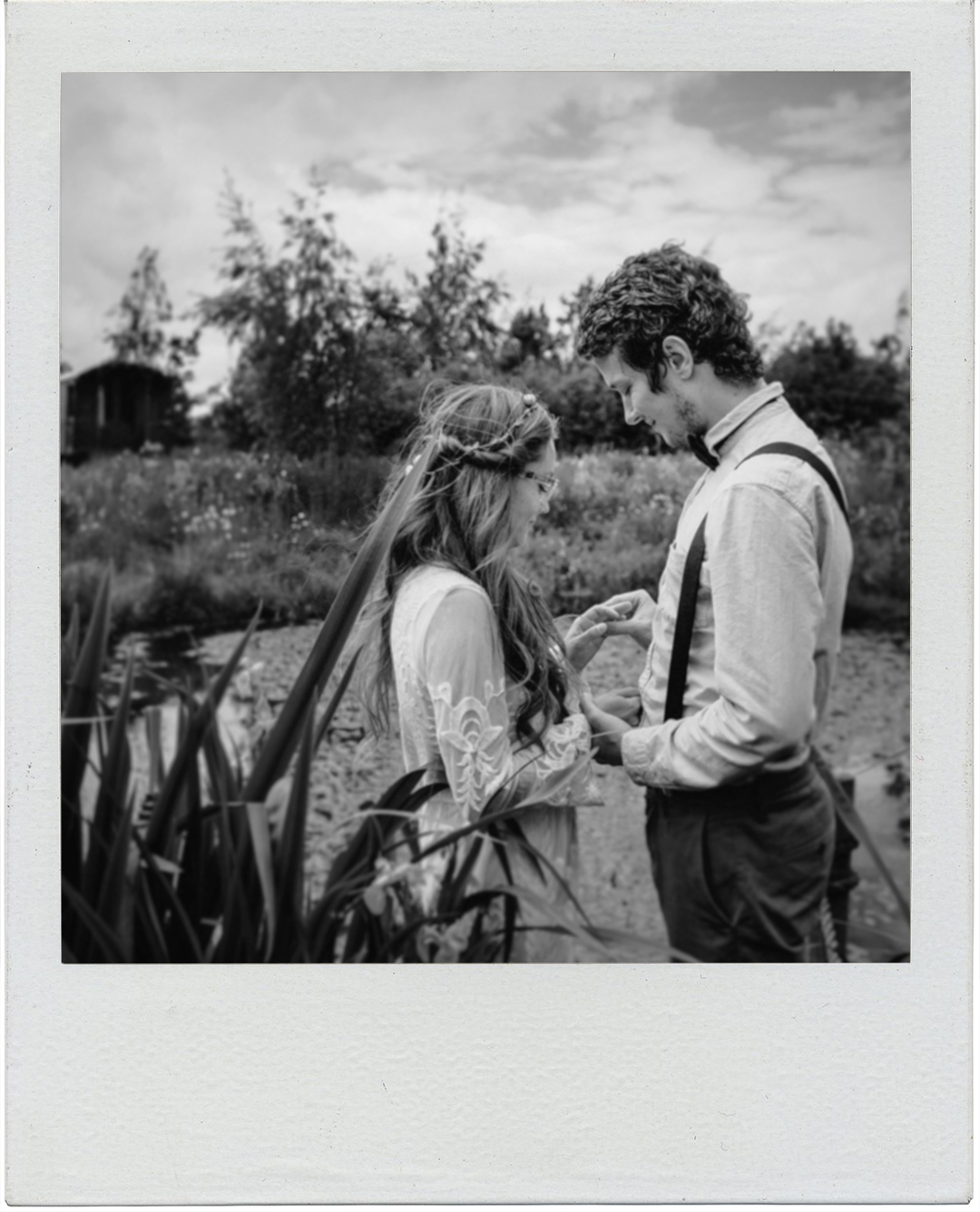 "Avril and Alan made us both feel so at home and really helped to make the day simply wonderful. From fresh flowers in the broom (for 'jumping the broom' ceremony) to our champagne served “with a flourish” of fresh sprigs, and making sure we knew all the places to visit for photos, we felt truly cared for from the start." 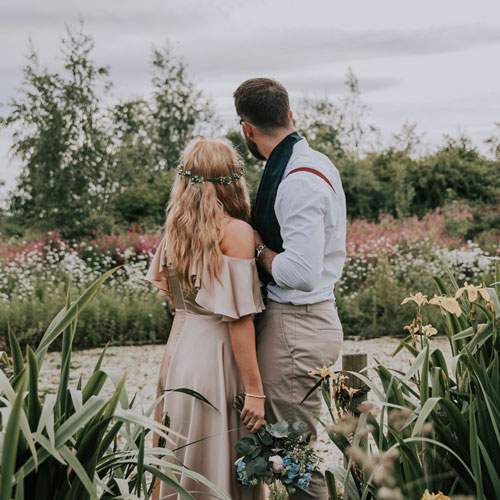 Eloping is one of the most romantic and magical ways to get married and allows the couple complete freedom of organising their own special day.

Scotland has traditionally been the place to run away together to get married. This custom was particularly popular in Scottish Border Towns and Villages, where couples would seek out a fisherman, joiner or blacksmith who would marry the couple for two guineas or a dram of whisky. Edinburgh too was a popular destination in the 19th century. And what could be more romantic and magical than getting married at Roulotte Retreat, in the heart of the Scottish Borders, just below the legendary Eildon Hills where poet Thomas the Rhymer ran off with the Queen of the Fairies.
‍
If you’re looking to Elope, get in touch with us and we’ll help organise your Special Day, in secret... sssshhhh! 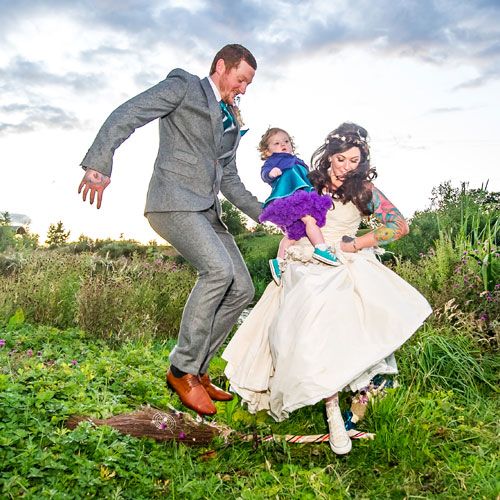 Another ancient custom is ‘jumping the besom’ or the broom. This broom is specially made for the couple and has its origins in Scottish, Welsh and Roma cultures amongst others. In front of witnesses, the couple sweep their past away with the broom and then the broom is held and the couple jump over it symbolising the start of a new life together. 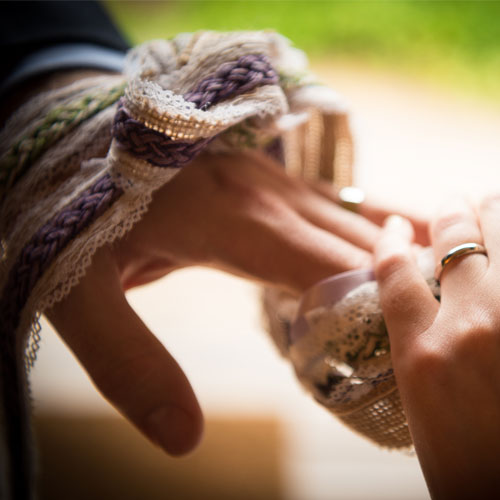 Handfasting is an ancient practice in many cultures and is a symbolic way for couples to represent their marriage with their hands being tied or knotted together with ribbon, cord, tartan or gold thread and can be part of the actual Wedding Ceremony. One couple tied the knot with a pair of trainer laces - they were both runners!

The Celtic Knot symbolizes how everything is connected and is a form of sacred geometry. These ancient knots  are universal and represent the continuous cycle of existence found throughout the world.  The Infinity Knot has no beginning and no end, symbolising Eternal Love. Handfasting was once a common practice all over Scotland and its original meaning was to allow a couple to declare their intention as a simple formality when meeting at large annual gatherings or fairs before living together for a year. The couple would then marry a year and a day after the handfasting ceremony if they still so wished. 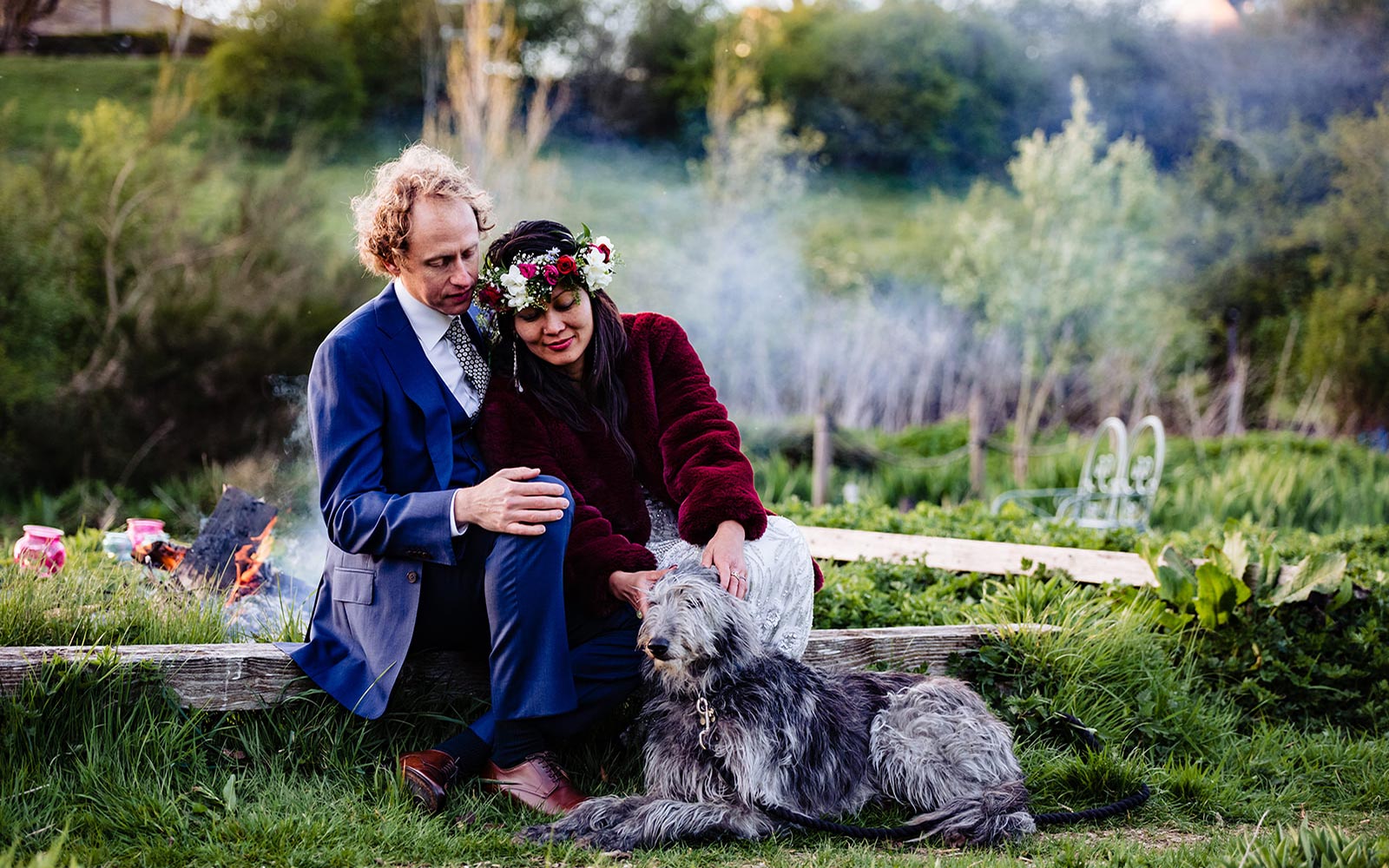 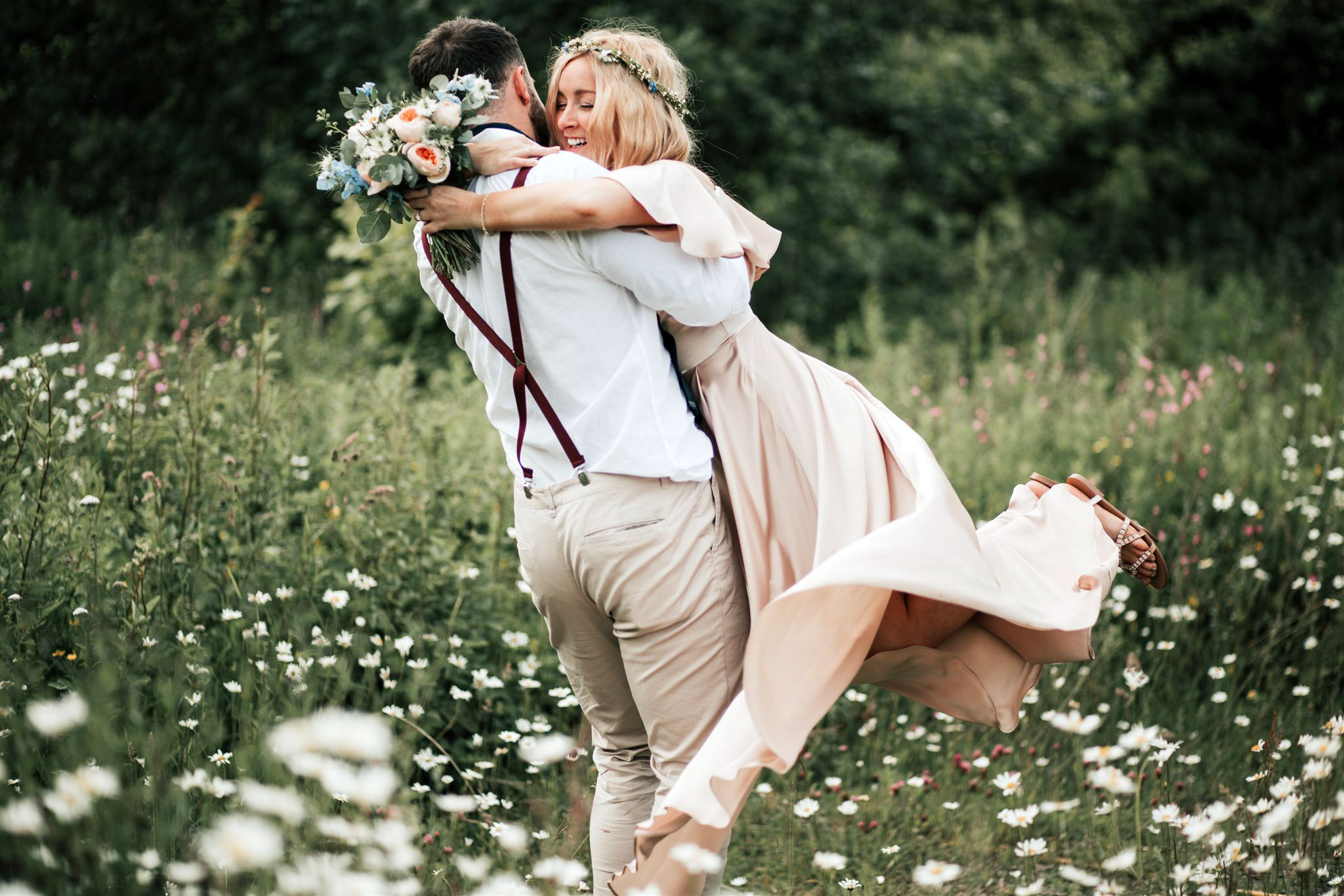 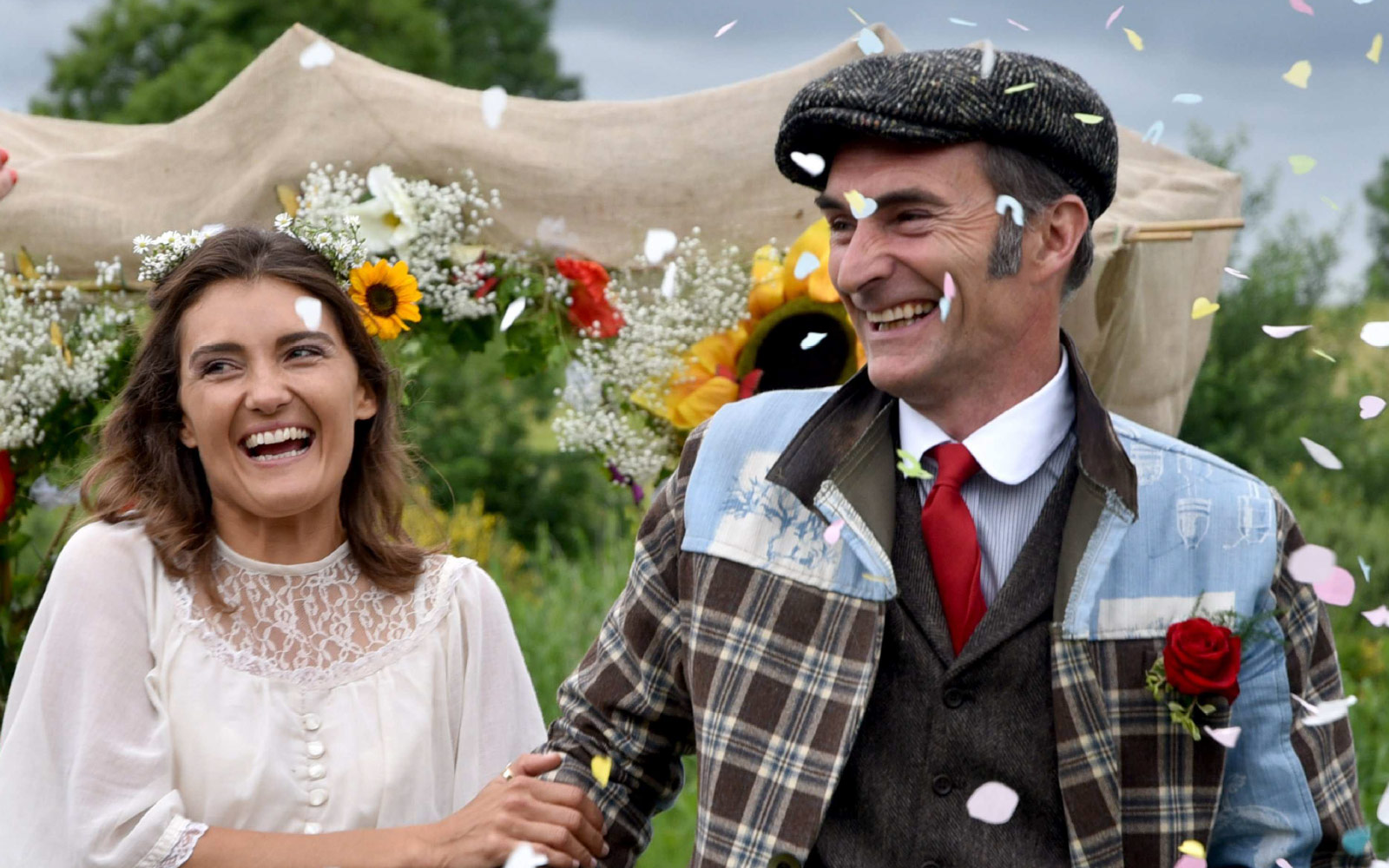 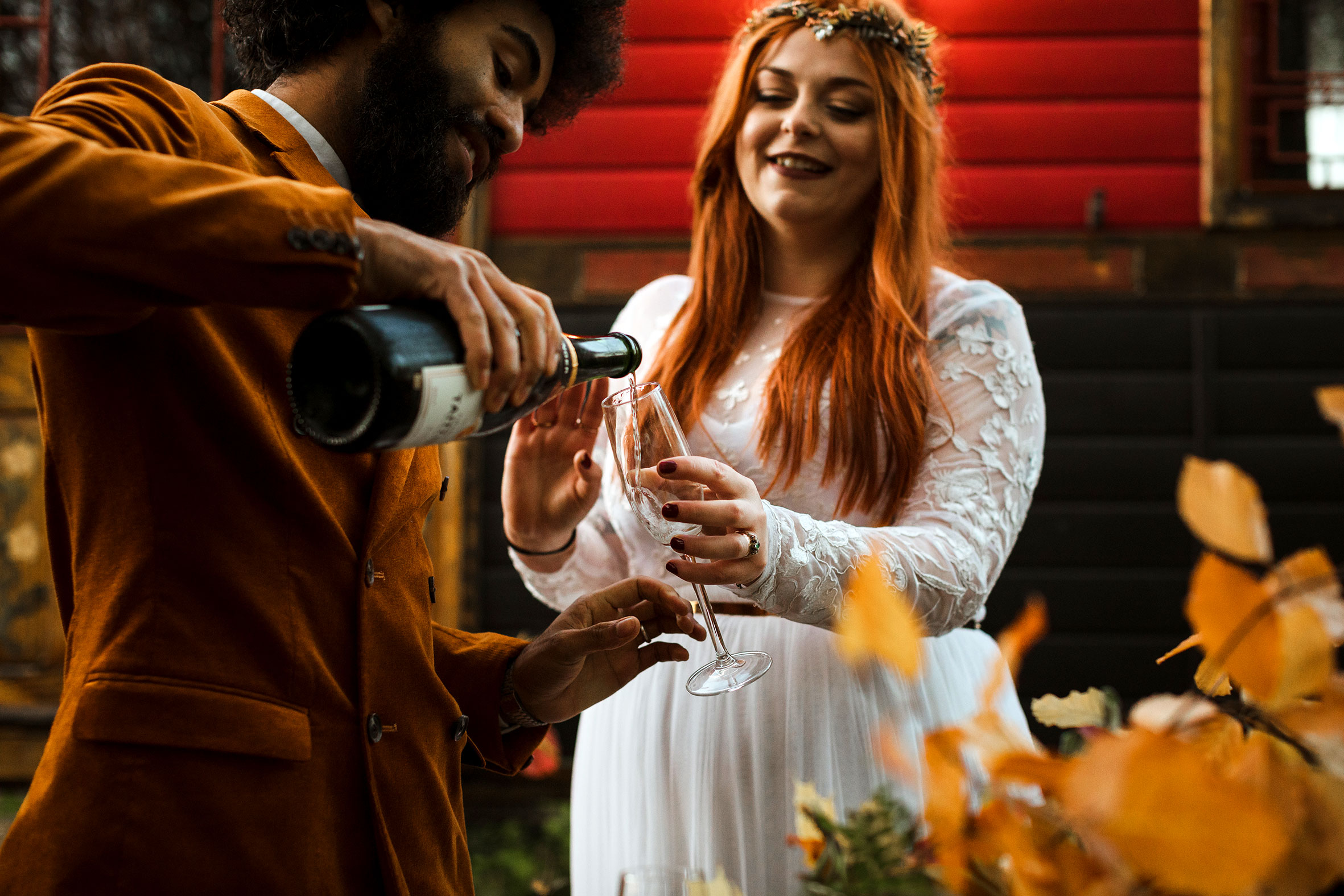 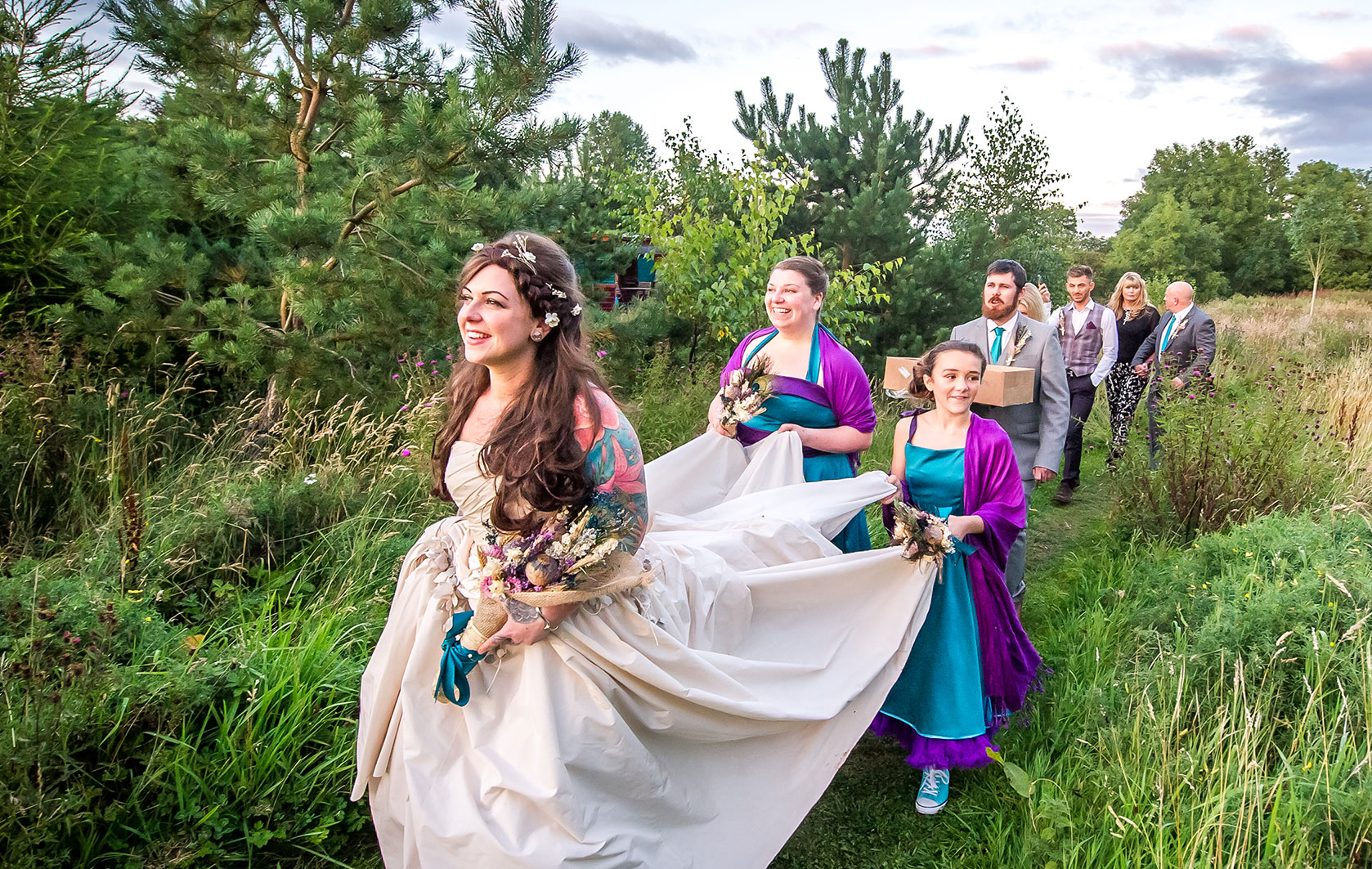 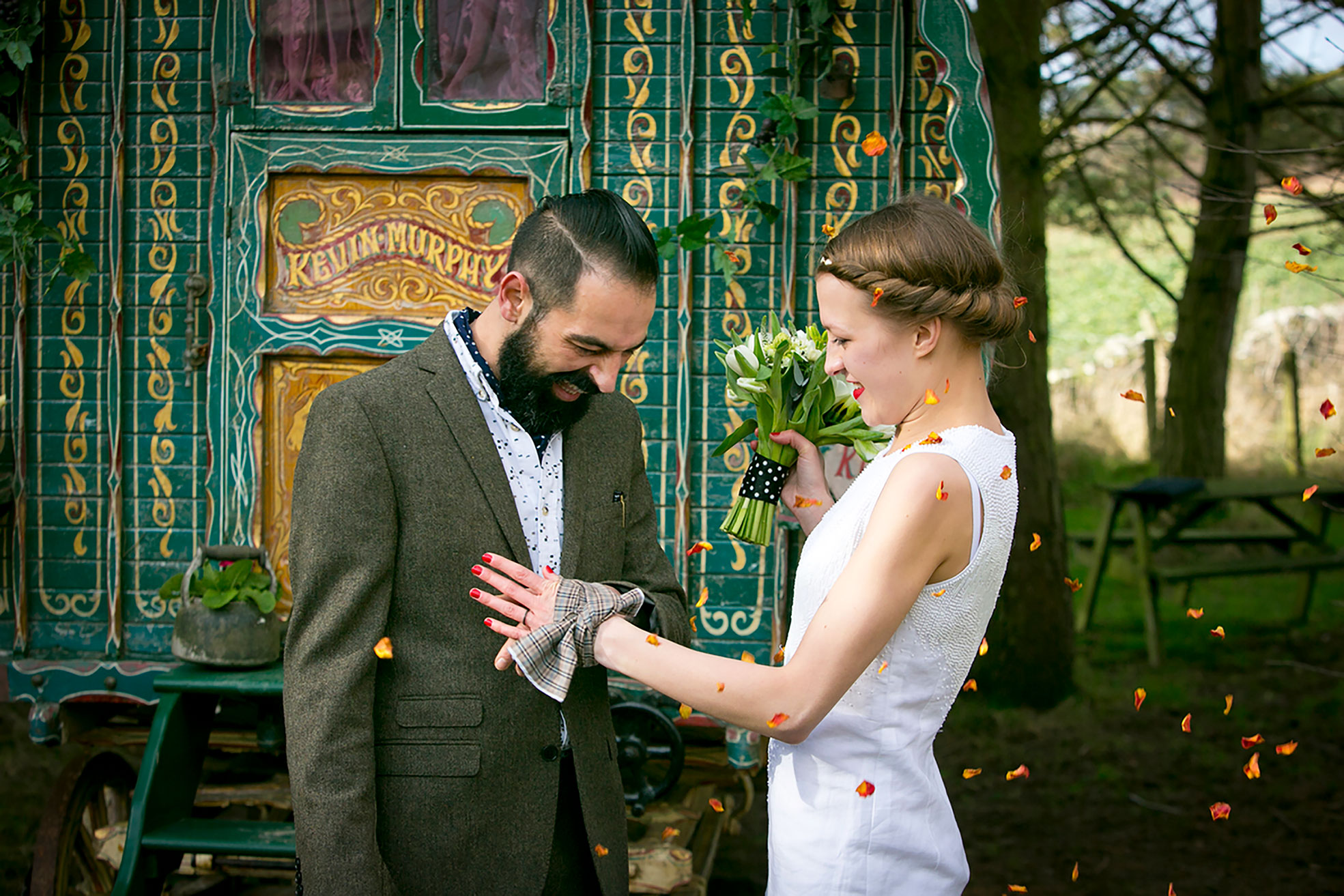 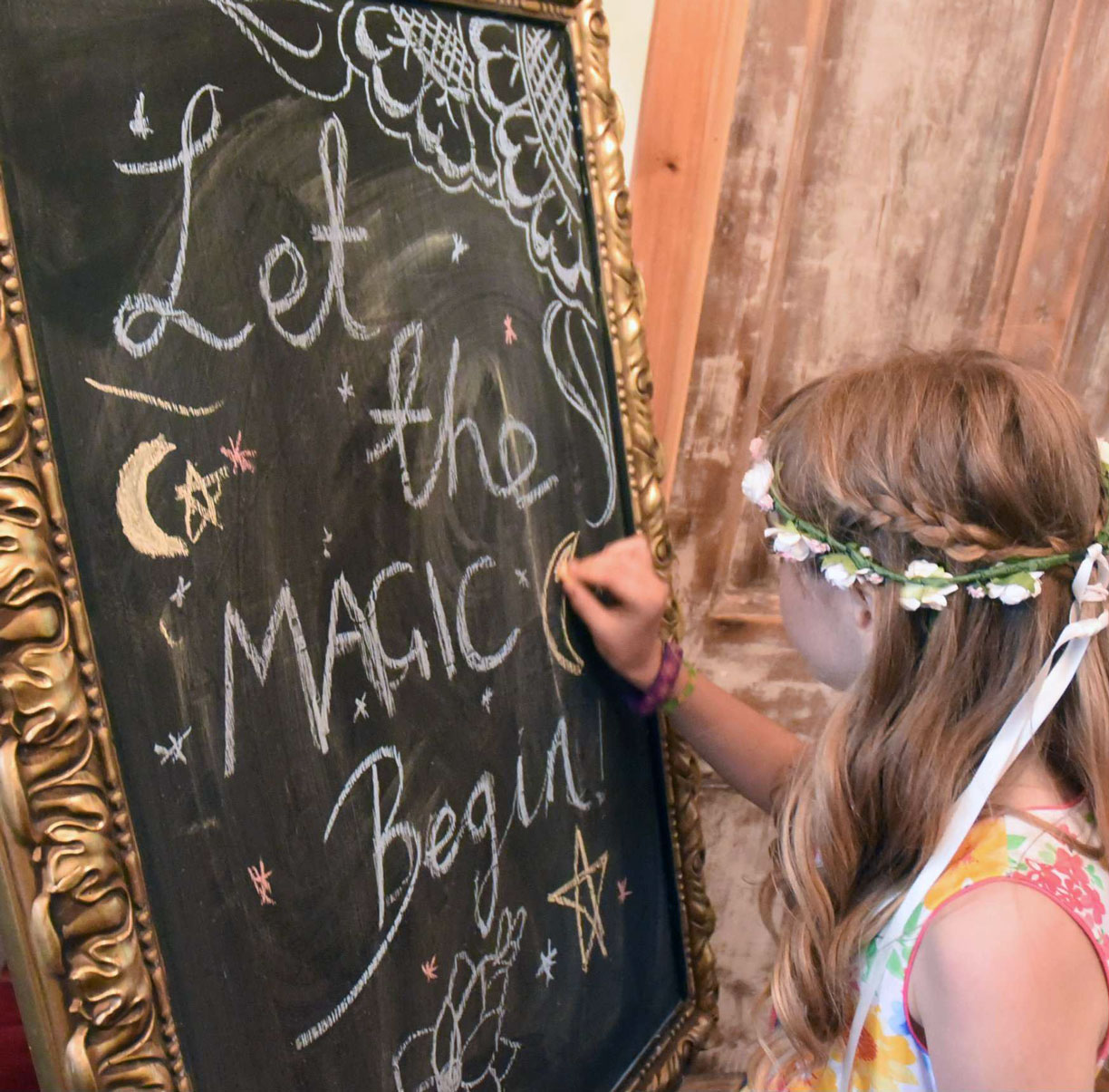 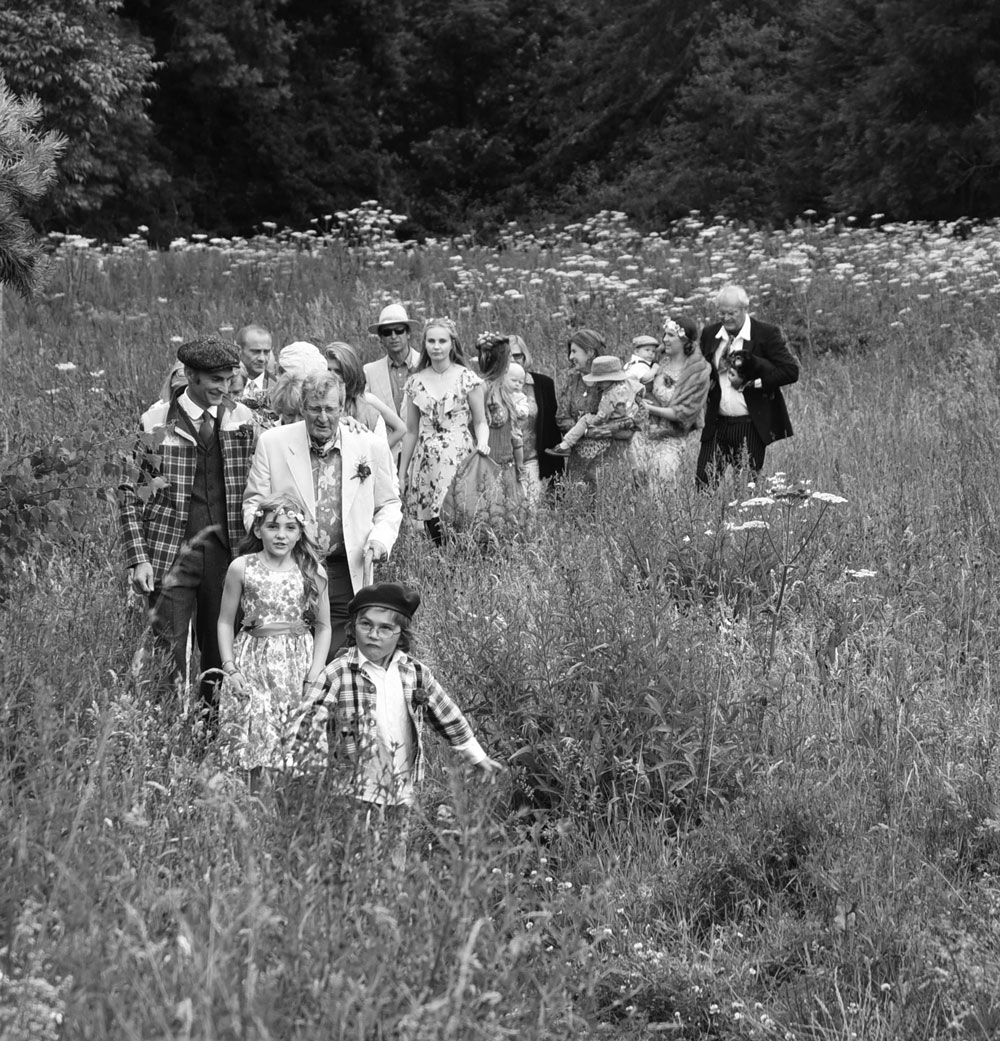 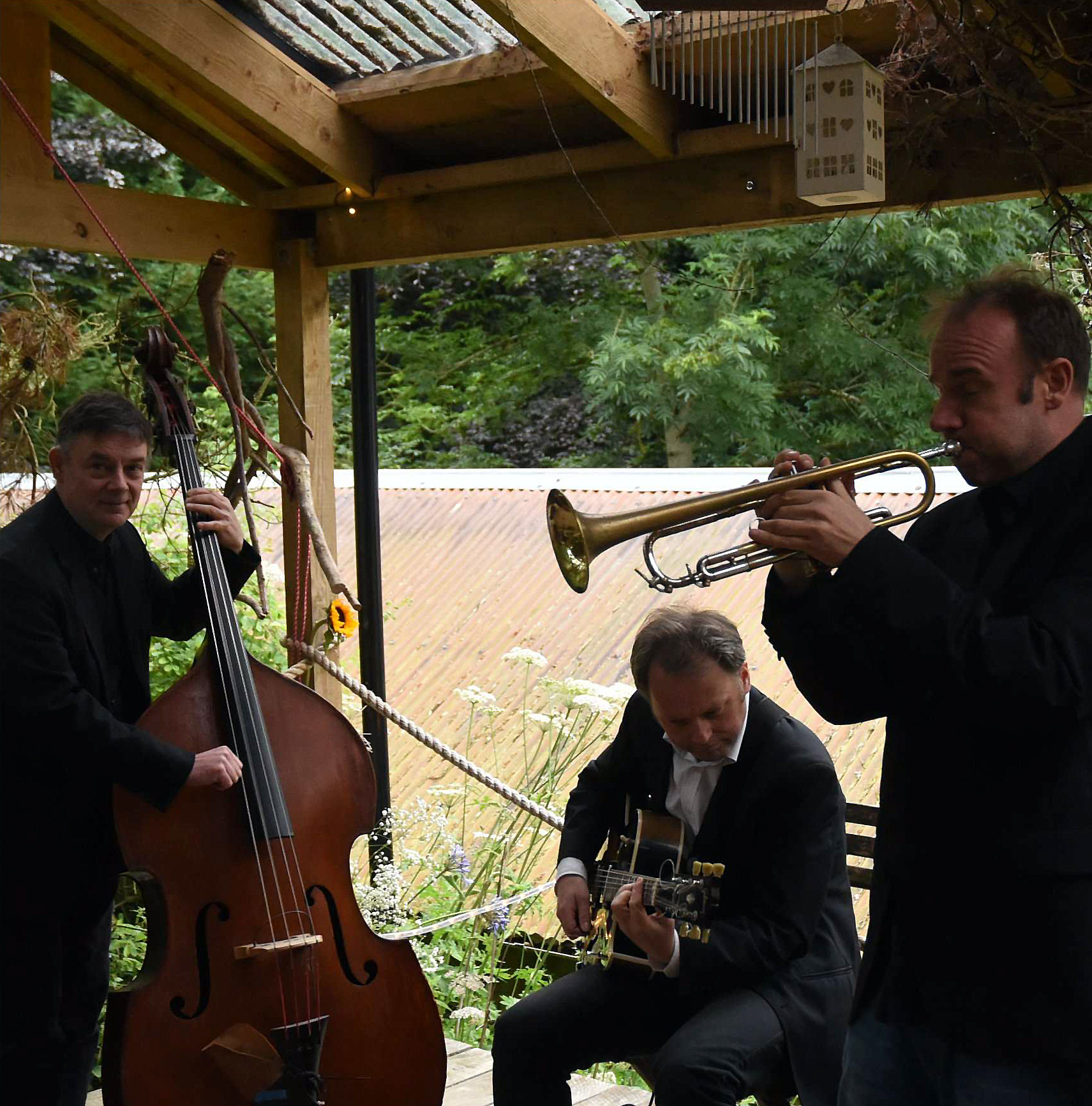 Situated in a wildflower meadow in the heart of the Scottish Borders Countryside just below the legendary Eildon Hills. Relax and recharge in authentic French and Dutch roulottes.