Our Studio has been transformed!  From a storage room filled with antiquities destined for the roulottes as well as the proverbial dumping ground for everything else you can't quite find a home for she has now emerged like a beautiful butterfly, filled with light, space and colour.  We are still finishing off the floor but she is almost ready to go!  We have in fact had a few impromptu gatherings as the different stages have been reached with a few guests enjoying bringing in the New Year around the wood burning stove, which lies in the heart of the building.  In February too we enjoyed sharing this beautiful space with friends filling the place with music, song, film, dance, fine food and laughter!

More recently several creative artists from The Glasgow Wedding Collective came to shoot 'The Elopement' which we shall share when it is finished.  Suddenly the studio was a flower shop, hair dressing and beauty salon, dressing room, photography and film studio - so alive and brimming with creativity!

Next we enjoyed the sounds of Tasha Blackmore who along with 80:8 Recording and Design created her first music video, 'Permanent Memory' in our meadow, using Devanna as well as the lochan, jetty, Alan's bench and the firepit.  Tasha recorded another of her songs, 'Close Enough Away' live in The Studio, sitting on the sofa in front of the wood-burner under the chandeliers!

The essence of the 'old' studio is still there though as we have left a trail of its history throughout in true recycling fashion!  This old girl has fairly moved around - from being created for an Exhibition in Glasgow in 1954, or was it 1952? then moved to the Scottish Borders to stay for some time as the Gift Shop at Dryburgh Abbey.  Can you believe it - Alan and I would have walked through this very studio/gift shop many years ago when we got married at Dryburgh Abbey before we moved to the Borders, strange coincidence!  From the Abbey to almost being a garage for classic cars before coming to her present home on site here and becoming the previous owner's woodworking workshop.

As soon as we saw the studio over 10 years ago we decided this would be the Yoga Studio, but in the intervening years the studio was host to drying hay we had grown in the meadow for our ponies, growing tomatoes and green peppers and the beginnings of a storage space.  Our children took over the studio for a while enjoying spooky Hallowe'en parties, hosting a Circus Club with poi spinning, juggling with all sorts, unicycling, etc. and thank goodness I said no to the fire poi spinning! The studio will also be remembered by many who attended teenage parties, Alan's 50th and Solstice Celebrations throughout the years.

Since August we have been clearing, cleaning and creating and now The Studio is emerging into her new clothes, who knows what may happen in the next stages of her life as a space to be enjoyed by those who visit Roulotte Retreat.

I am planning a Yoga Day in the Studio on 21st April so at last, after 10+ years there will be space on the floor for Yoga mats!  Can't wait!  We have already had enquiries from other teachers who would like to use the Studio and the roulottes.  I can see this creative space being used for Yoga, Art, Creative Writing and Literary groups, Photography, Wildlife and Foraging groups, Music and Song Writers, Drama, Film and fashion shoots as well as Celebrations and Unusual Boutique Weddings.

So if you are planning an away day, workshop, celebration and would like a more unusual place with elegant, yet quirky accommodation and a gathering space under the chandeliers around the wood burning stove, then get in touch.

We have been really planting more native species which will attract a variety of birds, butterflies and bees. This includes Spring flowers and blossom for insects and especially bees with Autumn berries and fruits for wild birds.  All the planting will also provide cover and shelter for nesting birds and over wintering insects.

The trees and shrubs that we have planted will have been used specifically to enhance the colours of each of the roulottes, in different seasons. And the willow trees will enjoy the burn flowing through our meadow.  Some of the species of trees include cherry, crab apple, silver birch, willow, rowan and hazel.  We have also planted a number of shrubs including dogwood, broom, guelder rose, wayfaring tree, wild roses and hazel.

Around the roulottes we have planted wild strawberry, wild thyme, poppies, variety of herbs, wildflowers and grasses each to enhance the colours and reflect the themes of each roulotte.

You will just have to come and see the wonderful sight for yourself! 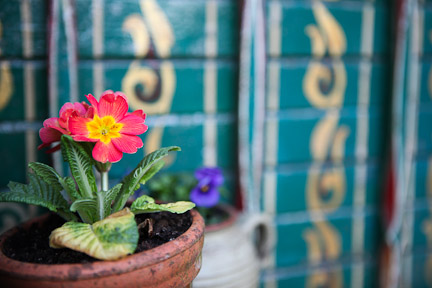 Valentines really is a special time of year here at Roulotte Retreat and with the sun shining today our guests really are seeing the best of the Scottish Borders in February.

And we just love some of our recent press coverage too.

Just forty miles from Edinburgh, deep in the Scottish Borders, is Roulotte Retreat, a collection of colourful, sumptuously furnished romany caravans encircling a little loch in a wildflower meadow. Yes really. The pretty town of Melrose is nearby but this feels like another world.